At Fragments from a Writing Desk, Hershel Parker has transcribed a sobering news story headed "Perils of Whaling." This May 1848 item relates a fatal encounter with a sperm whale by Melville's old ship Achushnet on December 22, 1847--four years before the publication of Moby-Dick (1851):

Versions of the story circulated widely in May 1848. Found so far, in addition to the May 23, 1848 report in the Louisville Daily Courier:

Below, the story as it appeared in shipping news under the heading "Whalemen," in the New York Herald, May 14, 1848. 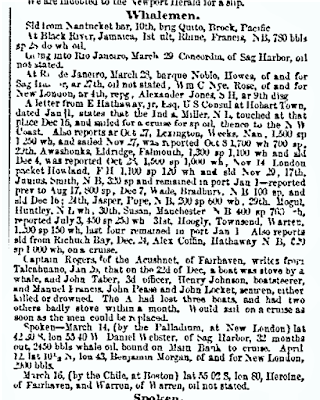 "Captain Rogers, of the Acushnet, of Fairhaven, writes from Talcahuano, January 26, that on the 22d of Dec, a boat was stove by a whale, and John Taber, 3d officer, Henry Johnson, boatsteerer, and Manuel Francis, John Pease and John Locket, seamen, either killed or drowned. The A[cushnet] had lost three boats, and had two others badly stove within a month. Would sail on a cruise as soon as the men could be replaced." 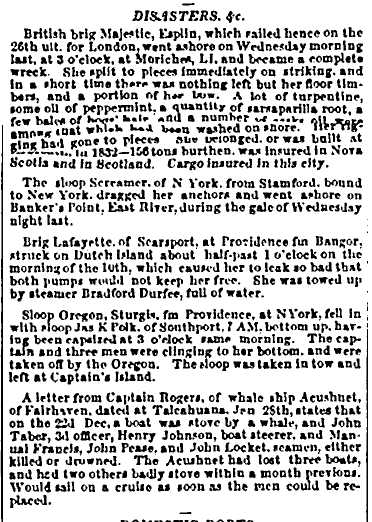 Both items identify seamen "John Pease" (instead of John Pearce) and Manuel Francis, who is not named in most "Perils of Whaling" versions of the story.
Posted by Scott Norsworthy at 9:47 AM