Five "Poems by Herman Melville" were posthumously reprinted from Timoleon (1891) in The Century Volume 44 (May 1892) on pages 104-105. Arthur Stedman selected Melville's poems "Art," "Monody," "The Night-March," "The Weaver," and "Lamia's Song," presenting them with reference to both John Marr and Other Sailors and Timoleon as "the last fruit off an old tree." Stedman's 1892 collection receives brief mention in the Northwestern-Newberry Edition of Melville's Published Poems, in the editorial notes on "Monody." Previously cited also by Howard Vincent in Collected Poems and Merton M. Sealts, Jr. in The Early Lives of Melville (page 54), but little discussed in Melville scholarship. The Contents section gives them collectively as "POEMS" under "Poetry" and names "Herman Melville" as the author.

Arthur Stedman receives due credit for the Introduction.

[THE death of Herman Melville, which took place in New York soon after midnight on the morning of September 28, 1891, was the signal for an outpouring of articles on the life and writings of an author whose vogue had temporarily subsided, partly through his own self-seclusion. Melville has rightly been called the pioneer of South Sea romance, and his "Typee " and "Omoo" gained an international reputation at an earlier date than the writings of Lowell, although both authors were born in the same year—1819. These books, with "Moby-Dick; or, the White Whale," soon became classics of American literature, and are likely to remain such. They have been continuously in print in England, and new American editions are now in course of publication. Melville's art of casting a glamour over scenes and incidents in the South Pacific, witnessed and experienced by himself, has not been exceeded even by Pierre Loti. The Civil War first turned his attention to lyrical writing, and many of his "Battle-Pieces and Aspects of the War" (1866) obtained a wide circulation. Near the close of his life he had printed for private distribution a few copies of two little books of miscellaneous poems, the last fruit off an old tree, entitled "John Marr and Other Sailors" and "Timoleon." From these volumes the following pieces have been selected. 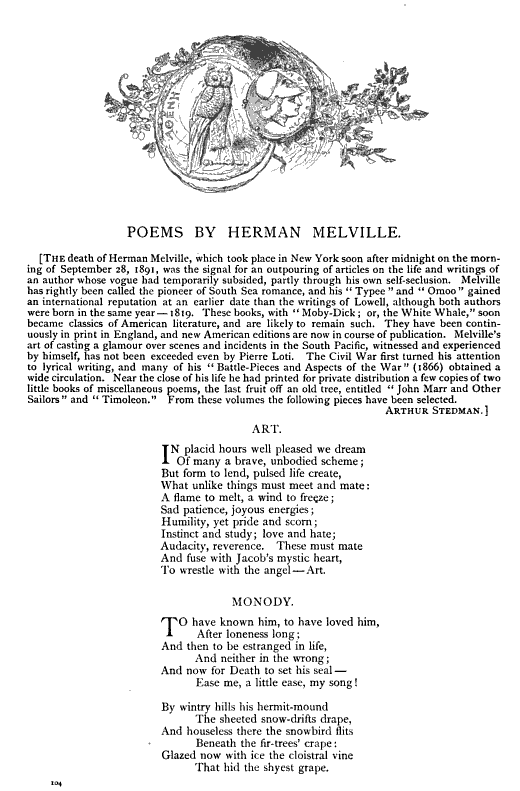 IN placid hours well pleased we dream
Of many a brave, unbodied scheme;
But form to lend, pulsed life create,
What unlike things must meet and mate:
A flame to melt, a wind to freeze;
Sad patience, joyous energies;
Humility, yet pride and scorn;
Instinct and study; love and hate;
Audacity, reverence. These must mate
And fuse with Jacob's mystic heart,
To wrestle with the angel—Art.

TO have known him, to have loved him,
After loneness long;
And then to be estranged in life,
And neither in the wrong;
And now for Death to set his seal —
Ease me, a little ease, my song!

By wintry hills his hermit-mound
The sheeted snow-drifts drape,
And houseless there the snowbird flits
Beneath the fir-trees' crape:
Glazed now with ice the cloistral vine
That hid the shyest grape.

WITH banners furled, and clarions mute,
An Army passes in the night;
And beaming spears and helms salute
The dark with bright.

In silence deep the legions stream,
With open ranks, in order true;
Over boundless plains they stream and gleam —
No chief in view!

Afar in twinkling distance lost
(So legends tell) he lonely wends,
And back through all that shining host
His mandate sends.

FOR years within a mud-built room
For Arva's shrine he weaves the shawl,
Lone wight, and at a lonely loom,
His busy shadow on the wall.

The face is pinched, the form is bent,
No pastime knows he, nor the wine;
Recluse he lives, and abstinent,
Who weaves for Arva's shrine. 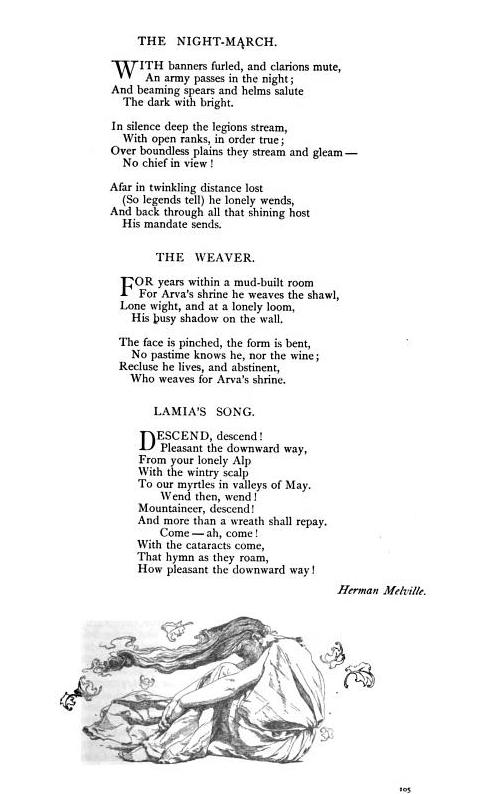 Numerous digitized copies of The Century Volume 44 with "Poems by Herman Melville" are now available courtesy of HathiTrust Digital Library, including

Posted by Scott Norsworthy at 8:33 AM