Review of Melville's Pierre in the Newark Daily Advertiser

Although strongly critical of Melville's supposed extravagance in Pierre, the review transcribed below nevertheless conveys the informed critical judgment of a friend and professed admirer--probably either Augustus Kinsley Gardner, who wrote New York letters for the Daily Advertiser under the pseudonym "Proteus," or (more likely?) AKG's father Samuel Jackson Gardner. According to the Cyclopaedia of American Literature, the elder Gardner had assumed editorial duties in 1850:


Leaving a life of ease and leisure at the solicitation of his friend, Mr. Kinney, he had entered upon this duty in 1850, at the age of sixty-two, and persevered in it daily for ten years—a remarkable instance of literary success, involving an. entire change of habit at an advanced period of life. But Mr. Gardner’s mental discipline was such, his mode of life so quiet and methodical, and his temper so uniformly cheered by good humor, that he felt little inconvenience from his new vocation. On the contrary, it doubtless invigorated his powers, and inspired new interest in the daily concerns of life, and the grander movements of society which he chronicled. He always wrote with ease and perspicuity, and with perfect truthfulness and simplicity. Mr. Gardner, after retiring from the editorship, passed his time mostly in the country, among his friends and relatives. He was in New York in the spring of 1864, planning the publication of a volume of selections from his writings for the press, to which he had given the title, Autumn Leaves.  --Cyclopædia of American Literature

Samuel Jackson Gardner stepped in just before Thomas Talmadge Kinney (1821-1890) formally took over as editor and manager of the Newark Daily Advertiser in 1851, upon the retirement of his father.

At first I favored the senior Gardner as the more likely reviewer. But now after re-reading the son's tribute to Dr. Francis and catching his assessment of the Doctor's mode of writing as "polysyllabic,' I'm leaning towards Augustus Kinsley Gardner. So then, long words are a fault in Melville's style but a sign of literary prowess in John Wakefield Francis:


He is an exceedingly able writer; while strength of thought most characterizes his literary productions, few would pass them by without particular noticing the Johnsonian elegance of his language. Somewhat pollysyllabic in his words there is an aptitude of expression and an affluence of language which never wearies by its tautology, or tires by its sameness.  --The Knickerbocker

Melville's critical friend of the Newark Daily Advertiser urged the author of Pierre in strong but well-intended terms to "leave off the constant straining for Pantagruellian effect for novelty":

PIERRE, or the Ambiguities. By Herman Melville.—Harpers.

Melville established himself in his early works as one of the first writers in this country, but most strangely does he belie in this last the judgement formerly passed upon him. He is apparently engaged in reading Rabelais and authors of olden time, and being much pleased therewith, endeavors to imitate them, but fails to copy their excellencies. He evidently has the idea that the public desire quaintness and oddity, and he strives to give them what comes to him only with an effort. The large polysyllabic words in which he endeavors to clothe his thoughts, appear as ridiculous as the stripling dressed in his fathers ample clothes. The sooner Melville gets these conceits out of his head and writes naturally, “is himself again,” the sooner will he attain that success to which his eminent abilities, when not distorted by a wild fancy, so will entitle him. Pierre contains much to admire, but far more to reprobate. The plot of the story is bad. There is either an immorality or nothing at all in the opening narration of the relationship between the mother and son. As it goes on, the son marries his own sister for no necessity, discarding for that purpose one to whom he is attached and who so fondly loves him, that she leaves her friends and home comforts, and goes to share his property and his love. In this state of polygamy he lives, in a burlesque Fourierite Association, till shooting both his own cousin and the brother of his last wife, he is arrested, and in jail, with poison furnished by her, they all destroy themselves. Such is the plot; the language is little better. Here is a sentence: “In mature age, the rose still miraculously clung to her cheek; litheness had not yet completely uncoiled itself from her waist, nor smoothness unscrolled itself from her brow, nor diamondness departed from her eyes.”

Here is a paragraph in contrast:

"Too often the American that himself makes his fortune, builds him a great metropolitan house, in the most metropolitan street of the most metropolitan town. Whereas, a European of the same sort would thereupon migrate into the country. That herein the European hath the better of it, no poet, no philosopher and no aristocrat will deny. For the country is not only the most political [poetical] and philosophical, but it is the most aristocratic part of the earth, for it is the most venerable, and numerous bards have ennobled it by many fine titles. Whereas the town is the more plebeian portion; which beside many other things, is plainly evinced by the dirty unwashed face perpetually worn by the town; but the country, like any Queen, is ever attended by scrupulous lady's maids in the guize of the seasons, and the town hath but one dress of brick turned up with stone; but the country hath a brave dress for every week in the year; sometimes she changeth her dress twenty four times in the twenty four hours; and the country weareth her sun by day as a diamond on a Queen's brow; and the stars by night as necklaces of gold beads; whereas the town's sun is smoky paste, and no diamond, and the town's stars are pinchbeck and not gold."

We are among Melville’s warmest admirers. We think him possessed of uncommon faculties, but his garden is run to weeds, and produces little worth the plucking. We write in all kindness, hoping to show and induce him to renounce his errors, leave off the constant straining for Pantagruellian effect for novelty, and in simplicity of language to allow vigor of thought to take the place of petty conceits. 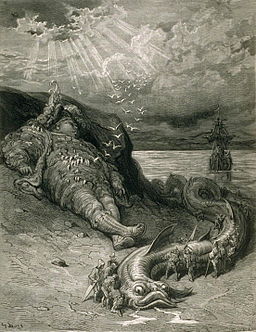 Herman Melville: The Contemporary Reviews (392-3) has the review of Moby-Dick in the Newark Daily Advertiser.

Related melvilliana posts:
Posted by Scott Norsworthy at 11:17 AM