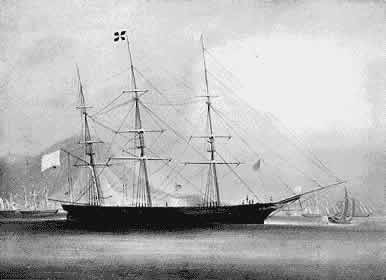 Sketches of nautical adventure in the Boston Journal reveal "The Kennebecker" as a friend and former shipmate of Thomas Melville, Herman's youngest brother.


Ship captain and later correspondent of the Boston Journal; b. in Chelsea, Me.; d. in Farmingdale, Me.; lived in Hallowell and Gardiner and commanded many of the ships sailing from Boston, including the Fearless, Sea Witch, and Franklin. One of the series he wrote for the Boston Journal was "The Cruise of the Sea Witch."

Scrapbook of newspaper clippings pasted over a Portland & Rumford Falls Railway train orders book, chiefly consisting of letters (1890) by John H. Drew, the "Kennebecker" correspondent of the Boston Journal. Also includes "A tribute from his native place" (1890) and "Notes" (1924). Compiler is unknown.  (Worldcat)

As noted previously here, The Kennebecker also wrote for the Boston Journal about cruises of The Reward and The Pathfinder.
Posted by Scott Norsworthy at 9:59 AM