Rev. Edward Taylor on board the steamer Mohegan, 1840 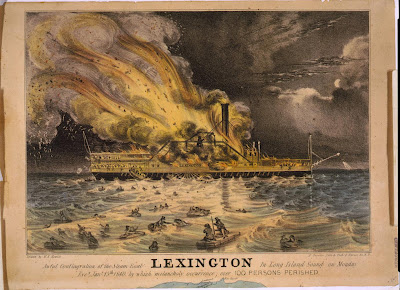 In our last we caught the New York Spectator in November 1839 proposing to name the newest steamboat on Long Island Sound, The Pequod. And we learned too, this same steamer would be christened instead, the Mohegan. The following summer, the likely original of Melville's Father Mapple was sighted on board this same Mohegan. Still on everybody's mind was the tragic destruction of the steamer Lexington on January 13, 1840.

INTERESTING INCIDENT ON BOARD THE MOHEGAN.

Among a numerous company of passengers on board the steamer MOHEGAN, Capt. Vanderbilt, from New York to Providence, on the evening of the 1st inst. was the Rev. Mr. Taylor, the Seamen’s friend and preacher in Boston.  Many of the passengers were much interested in having pointed out to them the spot where the ill-fated Lexington was burnt some few months since, when a whole hecatomb of victims were sacrificed to the destroying elements of fire and water.  Mr. Taylor was invited by some of the passengers to address them as the Mohegan passed over this never to be forgotten spot.  With the permission of the captain, the request was granted.  I listened in common with a great many others, with deep interest to the extemporaneous discourse made by the pious and eloquent preacher.  The evening, hour, the place, the reflections naturally arising from hearing from one whose home had been so long upon the deep,—the acquaintance of the preacher, with many who had made their graves beneath the “deep waters of the [dark] blue sea,”—all the associations of the place and the occasion, made the scene one of peculiar interest.— 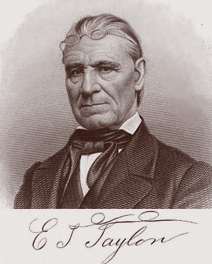 The discourse was brief, simple and affecting.  No attempt was made to excite the hearer, but an appropriate commentary was made upon the words of the Apostle Paul,— “For me to die is gain.”  The preacher spoke enthusiastically of his fondness for the sea,—a delight which had grown up with him from childhood, and which rather increased than diminished as he grew in years.  His language and figures and illustrations were at times beautifully eloquent and descriptive.  He spoke of the lamented FOLLEN with deep feeling and respect.  Though differing widely in opinion, he believed him to be a model of a man; always modest, affable, affectionate, pious, he was a man he loved; he was a brother in his religious attachments.  His body rested beneath the boat, among the sea-weeds of the ocean, but his spirit had ascended to God who gave it.  For him to die was gain, and so he hoped of many who received at an unseemly hour the summons of death.

“The sea their bodies, Heaven their spirits hold[s].”

The allusions to the sailors and to the ocean, to the voyage of life, to the mariner’s home, to the return to the objects of affection left behind after an absence of years—to the grandeur of the sea, the Maker of the Ocean, awakened a sensation which no man but a son of “Old Ocean,” could have called up.—  As the boat passed over these hallowed and beautiful waters, and all was still, save the voice of this man of God, who has done as much good in his day and generation as any uninspired man ever did, I could but think of the appropriate lines of Dimond.

“On a bed of green sea flowers thy limbs shall be laid,
Around thy bones red coral shall grow,
Of thy fair yellow locks threads of amber be made,
And every part suit to this mansion below.

No tomb shall ere plead to remembrance for thee,
Or redeem power or fame from the merciless surge,
But the white foam of waves shall thy winding sheet be,
And winds in the midnight of winter thy dirge.”

The winter’s night was the time of the sacrifice, and the poor victims, without a tomb-stone, but not without remembrance,

“lie where pearls lie deep.
They were the beloved of all,
But none o’er their lone grave may weep.”

Update 7/08/2015. The signature of the Boston correspondent might possibly be the upper case sigma Σ, and not "E" as I first thought. (Well, looking again it does look like "E" in both the Albany and Schenectady versions.) One Boston correspondent known to have written over the pseudonym Sigma is Lucius Manlius Sargent. Sargent's activism in the temperance movement befits the writer's tone and approving treatment of Father Taylor in reporting this "Interesting Incident on Board the Mohegan."  Found at Fulton History, the article as it originally appeared in the New York Daily Express:

Posted by Scott Norsworthy at 9:35 AM