Memnon Stone? Cake! That's Balance Rock, as even the most Distracted Wanderer knows. Long ago Melville's friend J. E. A. Smith revealed "The true story of the Memnon naming...."

Now I'm trying to visualize different rocks, belonging to the natural landscape of the young hero's weird dream-vision of Enceladus and the Mount of Titans as described late in Pierre. I know it's only a dream--a fantasy described in fiction, so really a dream within a dream. Nevertheless: in the novel, Melville locates the inspiration for Pierre's dream of giant, weirdly humanoid rocks at war with their tyrannical overlord in Nature--in the scenery and geology around the so-called "Mount of Titans." Critics routinely identify Pierre's Mount of Titans with Greylock.

Greylock, everybody knows. At his Pittsfield home, Melville could see Greylock from his window while writing Moby-Dick (1851). Then he formally dedicated his next book, Pierre (1852), to "The Most Excellent Purple Majesty of Greylock." Not surprisingly, Greylock and Melville's natural surroundings in and around Pittsfield in Berkshire County, Massachusetts strongly influence the scenic descriptions of the fictional "Saddle Meadows," Pierre's ancestral estate.


Henry A. Murray explains the connection in the notes to his influential Hendricks House edition:

In a later endnote, Murray affirms the importance of Greylock not only for Melville's depiction of Saddle Meadows, but also to the fictional "Mount of Titans":


About the time that Melville moved to the Berkshires the name of Saddle Mountain (or Mt. Saddleback) was changed to Mt. Greylock. Melville's description of the Mount of Titans is exactly applicable to Greylock, 15 miles north of Broadhall, Pittsfield. See note to Dedication.

Flipping back: the explanatory note to Melville's Dedication points out that "Greylock (3505 ft.) is the highest mountain in the state of Massachusetts." And Murray states emphatically that


"Greylock, rechristened the Mount of Titans, is not only a prominent feature of the country setting but plays a critical role as partial instigator of Pierre's Enceladus vision."

Good, but here's the thing. Greylock is real, the Mount of Titans fiction. Some of Melville's descriptive details match Greylock. and some don't. Saddle Meadows also resembles Gansevoort in Saratoga County, New York as pointed out in the Historical Note for the Northwestern-Newberry edition of Pierre:


"The Glendinning estate of Saddle Meadows was a combination of his Uncle Herman’s home in Gansevoort and his own Arrowhead, with perhaps some features of the neighboring Broadhall which had once belonged to relatives and was now owned by the Morewoods. The Mount of Titans was Mt Greylock….”

We might have to "interrogate" as critics now like to say, and perhaps go so far as to "complicate" the too-easy reading of Pierre's Mount of Titans as Melville's Greylock. Again, what first got me going on this question was my search for images of real rocks something like the ones Melville describes in Pierre's dream vision. Online anyhow, nothing close to Enceladus turns up in pictures of hikes to Greylock.

Forward then, on the quest for a natural counterpart to Melville's fictionalized Enceladus--questioning as we go, but with no thought of ever denying the huge overall influence of Greylock to whose majesty the book is, after all, dedicated.


"a singular height standing quite detached in a wide solitude not far from the grand range of dark blue hills encircling his ancestral manor."

Having once received its new name, Mount of Titans, the mountain turned monster:


For as if indeed the immemorial mount would fain adapt itself to its so recent name, some people said that it had insensibly changed its pervading aspect within a score or two of winters. Nor was this strange conceit entirely without foundation, seeing that the annual displacements of huge rocks and gigantic trees were continually modifying its whole front and general contour.

So far it's a "singular height" standing "detached" and lonely, and frequently altered by falling trees and rocks. But that's not how Greylock looks in the famous view from Melville's Arrowhead study.

Greylock from Melville's window does not seem all that "detached." At a glance Greylock looks not so far from another, lower peak--Saddle Ball I think it is. Indeed, this topography of plural peaks and contours apparently inspired the original name, "Saddle Mountain" or "Saddle Back."

Then Melville gives the height of the Mount of Titans: "some two thousand feet':


On the north side, where it fronted the old Manor-house, some fifteen miles distant, the height, viewed from the piazza of a soft haze-canopied summer's noon, presented a long and beautiful, but not entirely inaccessible-looking purple precipice, some two thousand feet in air, and on each hand sideways sloping down to lofty terraces of pastures.

Greylock is about 3,500 feet high, or some 2600 feet above the town which makes it hundreds of feet higher, at least, than Pierre's Mount of Titans. Seeking a natural counterpart to Pierre's Enceladus and his fallen regiment of Titans means looking for a place where strange rocks abound.

Before now the most suggestive likeness to Melville's Enceladus I could manage to find in rock was a Manitou Stone in Newbury, MA. As discussed in Manitou by James W. Mavor, Jr. and Byron E. Dix, manitou stones are "anthropomorphized stones" that "are found throughout North America as part of Indian ritual." The armless and legless torso seemed to me suggestive of Melville's limbless Titan, but these manitou stones, frequently resembling gravestones, have been shaped or worked by humans.

Jim Moore provides wonderfully suggestive pictures of strictly natural rocks in the south Berkshires, and above Cheshire in the central Berkshires. Fortunately, Godfrey Greylock himself can also guide us (again), in a book published in the very same year as Melville's Pierre (1852). In Taghconic, Godfrey Greylock, aka J. E. A. Smith tells readers where to look in Berkshire County for rocks that look like the demolished


"wall of the Heaven-defying Titans."

So these these rectangular building blocks of rocks don't so much resemble the Titans themselves as their "impious wall." Still, Godfrey Greylock's language does evoke "the repulsed group of heaven-assaulters" that Melville had just described in the belatedly-written Enceladus portion of his new novel. Sure Greylock has some, as does Taconic. However, the best viewing is only four miles away in the "Gulf" or "Wizard's Glen":


A Four miles' drive from our village brings the excursionist to a deep gorge, now called the "Gulf," but known in the earlier and less sceptical days of the settlement as the "Wizard's Glen." It is the wildest scene in our immediate neighborhood. A narrow valley is enclosed by steep hills, covered far up their sides with the huge rectangular flint rocks which mark this whole mountain range. You see them scattered every where, from Greylock to Taghconic; but nowhere else — unless, perhaps, at Icy Glen — piled up in such magnificent and chaotic profusion. It is as though an angry Jove had here thrown down some impious wall of the Heaven-defying Titans. Block lies heaped upon block, squared and bevelled, as if by more than mortal art, for of such adamantine hardness are they, that never hand nor implement of man could carve them into symmetry.
In their desolation they seemed charmed to everlasting changelessness; storm and sunshine leave few traces upon them; the trickling stream wears no channel in their obdurate surface; only a falling thunderbolt sometimes splinters an uplifted crag, and marks its course by a scar of more livid whiteness. No flower springs from, no creeping plant clings to them for support, save when the rare Herb Robert would fain cheer them with his tiny blossom; or some starveling lichen strives to shroud the livid ghastliness of their hues.

It is a stern featured place; and yet of a warm Summer afternoon, one — no, not one, it is too intensely sombre for that — but a party can pass a merry hour there, in the cool depths of the ravine. There are some books too, written in a spirit akin to the fantastic and demoniac grandeur of the place, which can be read there with a double zest. Perched between the double angles of a cleft boulder, I once keenly enjoyed some scenes in "Faust." "Manfred" would not be out of place there, nor would some parts of "Festus."

Closest rival to "Wizard's Glen" is not Greylock but ha! Icy Glen where Melville and Hawthorne first met during that momentous and now world-famous hike to Monument Mountain in August 1850.

As Johnathan A. Cook well summarizes the event:


The story of their first meeting at a literary picnic on 5 August 1850 and their subsequent sixteen-month friendship while both were residents in the Berkshires has often been told, including (on Melville's side) the friendship's initial heady intellectual exchange, creative fertilization, and confessional urgency, to be followed by gradual estrangement, disillusionment, and a long-term ambivalence.  --Melville's Marginalia Online

Wizard or Ice? Maybe both, but I can't resist Icy Glen or "The Ice Glen" for its association with Hawthorne in Melville lore, and for its proximity to Monument Mountain which seems a potential rival to Greylock as the natural model for Melville's fictional Mount of Titans. The Enceladus material must have been a late addition or interpolation in the manuscript along with added chapters on Pierre as author--"a grand afterthought" as Brian Higgins and Hershel Parker emphasize in Reading Melville's Pierre (172). Possibly then different influences and associations are working in this intensely emotional new material. The Enceladus vision could in some way reflect a turn from Gansevoort, New York and Arrowhead to different images and memories, say of Monument Mountain and Icy Glen.

After being there with Melville and company, Evert Duyckinck described Icy Glen as


“a break in one of the hills of tumbled, huge, damp, mossy rocks in whose recesses ice is said to be found all the year round.”  --quoted in Melville in His Own Time


Fallen trees, moist and slippery with decay, impeded our progress; break-neck descents alternated with as steep acclivities; often we tried a passage which proved too dangerous and we were obliged to retrace our daring steps; the yawning caverns, which the eye sought in vain to penetrate, narrowed our path; the rocks overhead threatened to fall down and cover us.

But the strange enchantment of the scene, the feeling that it was, or might be a dream, the utter unreality about the whole affair— such an expedition, at such a time, and so near that quiet and beautiful village, wrapped in perfect repose—precluded positive fear. Even now, it seems like a distempered vision rather than a fact, that eighty-five sensible people, possessed of sound mind and with a reasonable expectation of long life, should peril their precious bodies in such a wild-goose chase after the romantic.  --Holden's Dollar Magazine

Chase's poem on "The Ice-Glen at Stockbridge" marvels explicitly at


the Titan rocks gloomy and vast,
Fettered firm to the earth, where in wrath they were cast.  --The Ice-Glen at Stockbridge

Dream feeling and defeated Titans? Enough, on to Ice Glen:


"Cross the tracks into the forest beyond – you will immediately start seeing giant rocks situated snugly among the trees."  --The Outdoor New Yorker at Ice Glen

Likewise at Monument Mountain near Great Barrington, hikers also find moss-topped rocks that seem to grow out of the ground:
Another Berkshire Hiker at Monument Mountain exclaims: "Again, the rocks are amazing!"
Looking down from Squaw Peak you can just about see more defeated rebel Titans. Below the grouped rocks in the foreground is the tall tower of rock called Devil's Pulpit. What a name!  This Devil's Pulpit would surely be Melville's Enceladus--if only he wore a mossy turban on top like the rocks in the woods, shown above. I guess you can't have everything.
Closer up, Devil's Pulpit does look like the "battering ram" to which Melville compares the limbless torso of Enceladus: 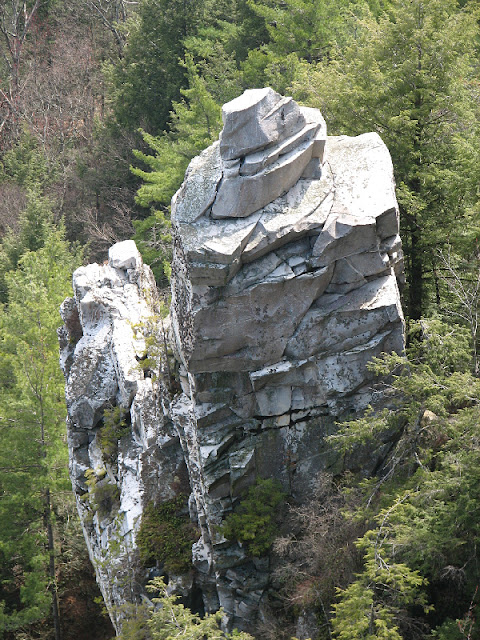 Posted by Scott Norsworthy at 11:11 AM