Besides the exhilarating survey of Melville's huge western streak in prose, there's a whole chapter on "Melville as Poet" in Frontier: American Literature and the American West. You can hardly blame Edwin S. Fussell for misprising Battle-Pieces when Melville's poetry was so generally ignored. On John Marr and Clarel Fussell returns to sparkling form (aided by the character synopses in Walter Bezanson's 1960 Hendricks House edition to which every reader of Clarel is indebted, one way or another):


The third notable Western character in Clarel [after Rolfe and Nathan] is one of the most prophetic figures in all Melville's dramatis personae, and a more than adequate refutation of the common notion that he never recovered from the Civil War. Ungar is everything an American should not be—Southern, Indian, essentially Catholic, unpatriotic—and he is obviously (after Rolfe) Melville's darling. This "native of the fair Southwest" even refuses to conform to the national haircut, but wears his hair long, "much like a Cherokee's." His face is copper, with high cheekbones, and his "forest eyes" are as sad as his "forest name." Ungar, "wandering Ishmael from the West," is the New World's surly answer to the Old, the butt-end of European Romantic projection. His bitterness is the inevitable product of the white man's perpetually sentimental aggressions:  "Indian's the word." Equally aghast at Southern slavery and the subtler exploitations of the North, Ungar especially despises Anglo-Saxons:


"lacking grace
To win the love of any race;
Hated by myriads dispossessed
Of rights — the Indians East and West.
These pirates of the sphere! grave looters —
Grave, canting, Mammonite freebooters,
Who in the name of Christ and Trade
(Oh, bucklered forehead of the brass!)
Deflower the world's last sylvan glade! "

... Although everybody senses that Ungar's charges are intemperately expressed, nobody can refute him. Nobody even wants to.  --Edwin S. Fussell, Frontier

Before leaving Ungar I have to wonder if anybody has found him, or rather his possible model, among ex-Confederate mercenaries? Hmmm, where to begin. Real Cherokee ex-Confederates of note include

and thus in Red Atlantic, Jace Weaver provisionally associates Ungar with "Stand Watie's brigade." These men never turned soldiers of fortune, however. Well perhaps a subordinate did. But wait, Ungar's Indian ancestry is distant (4.5.134-41), removed "far back" in time from his unnamed ancestor's "wigwam" wedding. Melville clearly has been reading up on the history of Catholic Maryland, including popular stories of how Andrew White the "Apostle of Maryland" worked among native peoples, baptizing Native American kings and princesses in their wigwams.


They could do their work more effectively, ad majorem Dei gloriam, in the rude Indian wigwam where they had established an altar, than in the hall of the legislative assembly.

Lord Baltimore obtained lands from the Indians by purchase, and not by conquest, and colonists and Indians and missionaries were usually upon the most friendly terms together.  --Catholic World

Ungar might as well be descended from Giles Brent who married the daughter of Kittamaquund (or Chitomachon) famously baptized by the Apostle of Maryland.


A final break with the Calverts prompted Brent and his equally influential sister Margaret Brent to move to Virginia about 1649 and settle near Aquia Creek. Giles Brent married the orphaned daughter of a Piscataway leader who had been raised by Margaret Brent and Jesuit missionaries who had converted her and her father to Christianity. If he had hoped that the marriage would secure him a claim to Indian lands and that he could promote her right of succession to her father's title, he was disappointed on both counts. Despite legislation restricting the rights of Catholics and occasional complaints about Catholic influence, the Brent family prospered in Virginia.
--Encyclopedia of Virginia

And certain details of Ungar's military career pretty clearly describe an officer--now tasked with "drilling troops" and inspecting if not trafficking armaments, formerly a cadet (West Point?). Weaver duly cites Hilton Obenzinger's discussion which is great and historically grounded, but unconcerned with finding any one Ungar in real life.

John P. Dunn has a potentially helpful book on Khedive Ismail's Army and a bibliography specifically on the subject of "Americans in the Nineteenth-Century Egyptian Army" in The Journal of Military History 70.1 (2006) 123-136 / Project MUSE.  Nobody there looks much like Ungar.

Closest single historical match I have found so far is Walter Hanson Jenifer who hails like Ungar from Maryland. Now for his ancestry, is it Catholic? Let's see, WHJ  is son of the Congressman Daniel Jenifer who was the nephew of founding father Daniel of St. Thomas Jenifer. So then, Anglican / Episcopalian. But early Jenifers (including DJ the father of Daniel of St Thomas?) in Maryland certainly were Roman Catholic.

Agnes Dicken Cannon calls Ungar a "disillusioned ex-cavalry officer of the defeated Confederacy" (1976 Essays in Arts and Sciences, 146). I'm not quite sure how she knows the cavalry tie, but there's only one ex-Confederate cavalry officer in all of Egypt. Maryland-born! From an article on "American Army Officers in the Service of Egypt" in the New York Herald, September 22, 1871:


The only cavalry officer among the Americans in Egypt is

The Colonel comes of the old family of that name in lower Maryland, and is a son of the late Daniel of St. Thomas Jenifer, many years a member of Congress and then Minister to Austria during the Harrison-Tyler administration. Formerly a captain of United States dragoons, then a general of cavalry in the confederacy, the Colonel now commands a regiment of Egyptian cavalry. He is well known in Virginia as the real hero of Ball’s Bluff, “Shanks” Evans, the commander of the Confederate forces, being three miles away when that brilliant engagement was fought. It is a curious coincidence that Jenifer, the victor, and Stone, the vanquished, in that memorable action, after escaping all the dangers and vicissitudes of the civil war, should now find themselves in a remote corner of Africa, both enlisted under the banner of the crescent and the star; but as “every dog must have his day,” he who was vanquished on the Potomac now commands upon the Nile, and this, perhaps, is the reason why, instead of being made Inspector General of Cavalry, a position for which he is better qualified than any man in Egypt, native or foreign, Colonel Jenifer has been assigned to the command of a single regiment.

Full heading of the Herald article reads as follows:

EGYPT AND AMERICA. American Army Officers in the Service of Egypt. Who They Are and What Have Been. Their Performances in the Past—Union and Confederate Soldiers Fighting Under the Same Flag.

In addition to Colonel Jenifer, the Herald profiles the following American officers in Egypt:

Most of these names appear again in another article headed "American Officers in the Khedive's Army," which ran in several New York newspapers including the New York Commercial Advertiser (September 28, 1871). Image below is from a reprint in the Ovid, New York Bee on October 18, 1871; found at Fulton History.

Colonel Jenifer is there, good. Charles Chaillé-Long was from Maryland but served with the Union army. Of the ex-Confederates, Frank A. Reynolds was born in North Carolina; Navy Lieutenant William H. Ward was from Virginia. Found this photo of Tennessean W. P. A. Campbell from Recollections of a Rebel Reefer by James Morris Morgan, online at Documenting the American South: 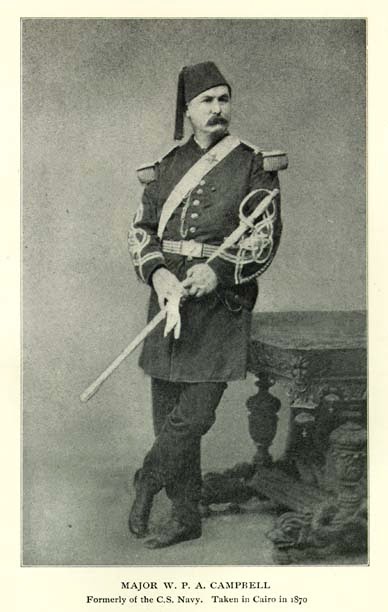 
graduated from West Point. He entered the Confederate Army; was lieutenant-colonel of artillery in the army of the khedive of Egypt, from 1868 to 1876, and is now civil engineer in the mining region of Colorado. -- RootsWeb


He resigned at the beginning of the Civil War, as a South Carolinian would indeed have been a rara avis in the Federal Army in 1861, and became an officer in the Confederate Army; while from 1870 to 1873 he was a Colonel of Ordnance in the Army of the Khedive. --Marian Gouverneur via ReadCentral

Is it William or Alexander Macomb Mason? Also known as Mason Bey and originally from Washington (District of Colombia). Accomack identifies E. Hunt as a Virginian, so he won't do for Ungar's prototype.

To be sure, Ungar looks like a composite figure, a hybrid inspired by factual details from more than one individual biography. Not only that, we have to allow Melville's imagination to work its magic. After all, Melville's Djalea puts Ungar on the shore of Jaffa


With Turkish captains holding speech
Over some cannon in a pile
Late landed—with the conic ball. --Clarel Part 4 Canto 5

and here we are still in Egypt.

Nevertheless, our Maryland native Walter Hanson Jenifer (1823-1878) is surely deserving of closer attention as one possible model for Melville's Ungar. Ex-Confederate, Cavalry officer, Maryland-born, almost Catholic, publicly identified with other American soldiers of fortune in the Khedive's Army--we're so close to home. If only Jenifer had something remotely like an Indian name. Or maybe one of the Virginians is kin to Giles Brent. A-ha, Marylander Brent Giles relocated to Virginia so really we should be looking there for any real-life English/Catholic/Indian forbears.

Which brings up another problem, for next time I guess: how exactly is the name "Ungar" Indian?

Posted by Scott Norsworthy at 11:38 AM